Let's Take Christ Out of Christmas!

Let’s take Christ out of Christmas. It would solve a problem for us religious types.

I’m speaking, of course, of the commercialization of Christmas. Sometime between Canadian Thanksgiving and American Thanksgiving, say in mid-November, Christmas as we know it now begins in earnest. North Americans make pilgrimage to their malls to shop or to visit Santa and his elves in their pretty crimson miniskirts. We fire up Amazon and exercise our credit cards. We scan the papers for this year’s version of Starbuck’s coffee cup, and wonder what President Trump is going to say about the War on Christmas. None of us is very surprised when the little kids ask if the shepherds took a sleigh pulled by Rudolph to Bethlehem.


The bottom line is that Jesus comes in a poor second to our office parties, presents, and partridges in pear trees. And, frankly, I like all that stuff enough so that I don’t want to spoil it by feeling like I’m shorting Jesus when I’m having fun.

So, I say, instead of fighting the war on Christmas, let’s turn the other cheek and take Christ out of Christmas. 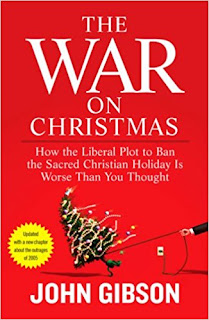 People who still want angels and shepherds can pick some other date to celebrate Christmas. December 25 was always sort of suspect anyway. The Roman Emperor Constantine picked that date for Christmas because he wanted to replace the traditional pagan solstice celebration with something from that new-fangled Christian religion he picked up to boost his dictatorship. Constantine guessed that Romans would be okay with giving up paganism, but he knew they wouldn’t want to give up partying. Ergo, Christmas!

It has been a nice experiment, but one that has run its course. It’s finally time to take Christ out of Christmas and give it back to the solstice or the North Pole or Father Time or something like that. That way we can party in December without guilt. We can give and receive gifts without having to drag the wise men into our justifications.

I think we Christians might do quite well without a faux birthday for Jesus. However, if not, if we really missed singing the Messiah and our favorite carols, we could celebrate Christmas on June 25, instead.

Christmas in the summer would be less hyped. We would probably pay a bit more attention to the real heart of the religious calendar, Easter—assuming we can hold the line against Easter bunnies and chocolate egg hunts, of course.

But it would be worth the effort! Let’s take Christ out of Christmas!

Posted by John Suk at 7:47 PM No comments: Links to this post

The Church's Strategic Plan Is Done. Next, We Take a Plunge. Join Us!

What should be last (if I wrote this chronologically) is first here, because for now it is the next big step. Lawrence Park Community Church (LPCC) is looking for a few good people to serve on its launch team for a new worshipping community! And we’re looking for people who would love to work on our wonderful morning service. Here’s the back story.

My congregation has been discussing strategic planning since shortly after I arrived in 2012. At first these discussions were about, “maybe doing this someday.” Later, we pulled a lay committee together to begin the strategic planning conversation. Finally, in early 2016, the church’s council decided Strategic Planning was their responsibility. Monthly meetings were given over to the process. We were organized and led by a fine professional who does this sort of thing, Warren Coughlin, who also happens to be a member of our congregation.

Along the way we did some interesting things! We had a Sunday service given over to talking about what we dreamed about and how we might accomplish those things. On another Sunday, we invited our members to visit other churches that they had heard about through the grapevine, instead of coming to our services. The next Sunday was given over to discussing what we experienced and how we felt about it. On another Sunday, the sermon was staged as a bit of a congregational revolt against the Strategic Plan. Members rose in the middle of the sermon to complain about the stuff that was going on in church. I, staff, and council members responded to the objections (that was fun!). And, naturally, we posted all the information that came in on the internet, discussed it at congregational meetings, and finally voted on whether or not to proceed with our strategic plan, just a few weeks ago.

During the process, Warren pulled together what he heard from council members and the congregation, and made up a tentative list of our values, and the vision that animates us. We discussed one of these values, and people in the congregation who embodied them, each Sunday over the summer. We have not reduced these values and the vision to a snappy line or two—at least not yet. But we did compile this in written form for editing and sharpening later on. We also agreed that our final plan needed to both embrace those who worshipped with us now and it had to reach out to a younger demographic than our current demographic.

Meanwhile I used this information to continually draft and redraft the evolving strategic plan. The plan commits us to being a voice for liberal (and post-liberal) Christianity. We believe our values, both lived and taught, will inspire our members personally. But they will also carry those values into the wider world. They will care about social justice, participate positively in the public square and industry, and be a healing community for each other and neighbours.

I could go on for quite a while about the plan’s details, but it boils down to three things. We’re going to enhance our morning worship service by doing even more of what our current members already love: great religious music for organ, piano and choir; a variety of other music from jazz to Broadway; strong preaching (I hope!); great community; and some drama, dance, and brass. It will have a strong “arts,” focus.

We’ll also begin a second worshipping community in our facilities. It will meet around food, secular (but spiritual) music, and small groups (we need to flesh this out), probably on Sunday later afternoons or evenings. Worship will be brief but lively. And finally, we’ll bless congregational initiatives (like our Art Show or Meditation Group) that people want to try with the church’s support and blessing.

Along the way I also studied church planting literature intensively. Most of it was written from an Evangelical perspective. I mined these books for information about what sort of resources, plans, and personnel were required for a successful launch. The books covered other matters, too: timelines, practical advice about research and marketing, and so on. I also read books about the "Millennial" generation, and pored over demographic research about our neighbourhood and city. All this helped inform the launch plan and staffing goals we settled on.

Early in the process, LPCC realized that a sizeable amount of money was available from our Presbytery to help fund a new initiative. To apply for the money, Presbytery wanted to evaluate our strategic plan, and wanted to see a business plan, a budget, and a timeline for the length of the funding. Presbytery could grant up to 100,000 dollars the first year. Each succeeding year, if certain conditions were met, the funding would continue, although it would be reduced by 10,000 dollars per year. 230,000 dollars would be made available in the first 30 months alone. Funding could continue after that (and a further reapplication), but only if concrete benchmarks for attendance and revenue are met. Presbytery wants the new launch to be viable for the long term. So does our congregation!

At LPCC, one of the key matters that came up for discussion along the way was “how much should we contribute to this plan?” The perspective that framed the shape of our answer was this: If we do nothing, in ten or fifteen years, if present trends continued, the church will likely “age-out,” and have to close down. Upon closing the Presbytery would receive the bulk of the value of the church’s real estate assets—perhaps as much as twenty or more million dollars! Why not use some of those assets now, to change course and do a new thing? Sure, it is risky. LPCC might fail. But the worst possible outcome would be that we still close, but leave a million dollars or so less to Presbytery.

In the end, the decision was to invest an amount of money about equal to Presbytery’s commitment over 30 months. That would limit our initial financial exposure to the amount of money we have in our endowment. Further investment will depend upon meeting our long-term financial and numbers benchmarks. If we are meeting those, we can continue investing along with Presbytery for up to ten years before the projects are self-sufficient. We also agreed that we would not ask current members to increase their giving to fund our initiative. We’d take out a line of credit, instead, if necessary.

Using those numbers and the strategic plan itself as a guide, a business plan was written. It included thirty- and ten-year budgets, timelines, as well as all the other stuff you expect to find in a business plan. We’ll be investing in church consultants, in a community engagement person who will focus on getting the word out about both of our worshipping communities, advertising, and (given our current plans) a new minister. But we’re flexible, and will seriously consider course corrections that our consultants suggest.

And that is where the launch committee comes in. We need half a dozen people who want to fully engage in this project. You don’t have to be a member of our congregation now, to get involved. You can be very young or not. You might be in seminary, or in a neighbouring church that wants to “look in” on what we’re doing, or you might be a community person who is intrigued. But we need people with a sense of adventure, people who are spiritually curious, and people who are committed to our congregation’s “big umbrella” approach to church.

If this is up your alley, send me an email (johndsuk at mac dot com)! If you want to be the new minister to take on a project like this, send me an email! (American UCC ministers invited to inquire too!) And if you want to read earlier blogs on this topic, here is a list of earlier articles I’ve written.

Posted by John Suk at 3:07 PM 2 comments: Links to this post