Mountainside United Church in Westmount (Montreal) is moving or amalgamating. As the article below suggests (to me at least) this raises all sorts of interesting questions for all of us, regardless of our denomination. Montreal’s situation is unique, of course, given the role language (to some degree) has played in the equation. But the underlying dynamics, where only a fraction of the people who used to go to church still do, is relevant to all church members, especially those of us who worship in large urban/suburban centres.

One of my parishioners who grew up at Mountainside noted that Montreal churches seemed more adept at amalgamating than Toronto churches. The subtext of her comment was something like this: “Why are there so many churches that insist on struggling on to the bitter end in Toronto? Why don’t we talk about amalgamation earlier, before the death throes set in, when there is still opportunity to do something new and exciting together?"

I think that when churches are forced to amalgamate because the alternative is death there will be little energy left over to do a new thing. Staving off death is the overriding goal, after all. I also believe that earlier, strategic amalgamation might allow the pursuit of other goals before energy and resources have evaporated. Such churches could consider multiple types of worship throughout the week and on Sundays, targeting services to different demographics. Resources for appropriate staffing, marketing, and outreach would not yet be used up. Congregations would arrive at the amalgamation service less anxious about survival and more willing to work on new ventures.

Lyle Schaller, the (mostly) mainline church admin expert, told me once that when two churches amalgamate, the final attendance numbers would finally level off at the level of the best attendance of the largest of the two churches amalgamating. He also suggested that the only way around this trend, which he had long observed, would be to amalgamate before the death watch set in. Death-watch amalgamations are so tempered by sadness, regret, emotional loss, and often, conflict, that they rarely succeed. What is needed to make amalgamation work, in other words, is vision and resources, not the last best hope for survival.

I think that those of us who have thought of amalgamation know this in our guts. But we have little stomach for change and its risks—including for ministers, potential job losses, and for members a whole new Sunday routine in a strange place. We’d rather soldier on till retirement, or till a better opportunity comes along, and we’d all love to avoid conflict and the pain that goes with hard (even if strategically smart) decisions. But maybe it is time for many more local churches to sit down together and talk this through, and maybe even dream a bit. It seems a small thing given that much of what we’ve tried in the past hasn’t worked at all.

What do you think? 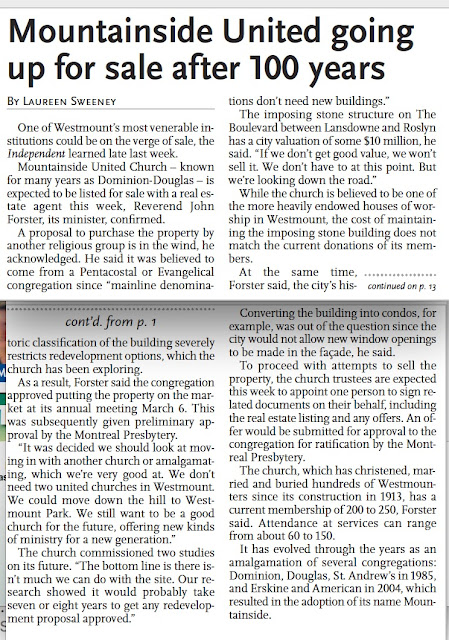 Posted by John Suk at 10:26 AM No comments: Links to this post

Preaching "The Lion King" Instead of Scripture

This coming Sunday I’m preaching The Lion King. Although we’ll read scripture during the service, a single image from The Lion King will serve as the sermon text. It’s the scene where Simba is lectured by his father, King Mufasa, for putting himself and his friend Nala in danger by disobeying him and visiting the Elephant Graveyard. While there, three hyenas almost manage to eat Simba and Nala for lunch. King Mufasa saves them in the nick of time. But he is angry that his son Simba has disobeyed him.

Now, as Simba walks toward his father to receive his punishment, he puts his tiny paw into a huge footprint made by his father’s much larger paw. And that image, the naughty child’s paw in the magisterial father’s paw—that image is the sermon text.

This freedom is new for me. In seminary, I was taught that all sermons had scriptural texts. Not only that, it was the preacher’s unique job—something that he or she trained many years for—to get the interpretation of that text exactly right. There was a whole long process for doing so—I used to teach it, in seminary, the “hermeneutic spiral.” You read the text in Hebrew or Greek to make sure you catch interesting nuances not available in translation. Then you read the text in its immediate context, trying to discern how it fit into the passage it was found in. Then you compared it to similar texts in the Bible, in order to discern how it fit into its larger message. Then you fit the text into the larger “redemptive-historical” story of the Bible, the one where Jesus dies for everyone’s sins and is raised on the third day. All along the way you pretend to be able to bracket your own prejudices, hopes, dreams, and ignorance. And finally, you figure out how to state your conclusions in a way that is relevant for people who live today.

All along the assumption is that all of scripture is divinely inspired, that there are no mistakes in it, that it all fits together like a puzzle (even if at first it didn’t seem to), that every tense change and verbal mood fluctuation was intentional and important, and that all of this is authoritative for all of life and so on.

You get the picture.

But what happens when you don’t buy these assumptions anymore? When you don’t think it is all “God-breathed,” that it is all coherent? What happens when you recognize that scripture is full of inconsistencies, that you often can’t get into the mind of the original author, and that if you could you’d find that it was probably just as confused, inconsistent, stubborn as you are? How do you preach when you think that the Bible’s attitude towards gays is hateful, towards adulterers is far too harsh, that its attitude to slavery has been too long forgiven, its mythology of end times too fantastic and inconsistent, and overall its message about God is more confused and various and anthropomorphic and incredible than most conservative Christians are allowed to think?

And how do you preach when in spite of all this, you still love scripture and are amazed by what you find in it?

I’m feeling my way here. When I joined the United Church of Canada, four years ago, it was as if someone left the gate open. At first I galloped out of the coral and just reveled in the feeling of not being tied up anymore, not being restrained.

But after awhile, once you’re free, you have to ask yourself, “what next?” and “Where to?” and “to what end?” That’s where I am now.

So I’ve put together a couple of ideas that are (loosely) guiding me. They’re not a systematic theology of preaching or anything like that. I’m guessing that some will take strong issue with them, and others might be able to add helpful comments. So here are ten thoughts on preaching the Lion King instead of scripture.

I’m pretty sure I know what my friends in Evangelical circles will think of such musings. But I might be surprised. I’d like to hear more about what my new, theologically liberal friends think. What insight would you add?